A Day with Cade 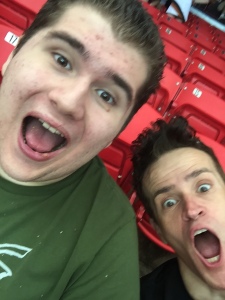 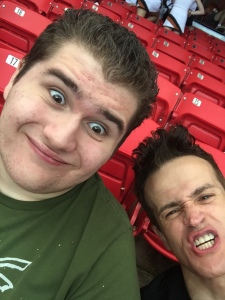 “Gillette, the best a man can get.”  Cade stared in the mirror with one eyebrow raised.  His electric razor buzzed as he prepared for a shave.

“Dad?”  He asked for my attention.  “What kind of razor does Austin Powers use?”

I love the shout outs of random product slogans.  I love the unexpected questions that leave me searching for answers.  I love that Cade never whines or complains about being bored.  And although raising an autistic child brings a great deal of worries I love my son.

It is rare that I get away with “I don’t know.”  Cade usually doesn’t stop until I give him an answer.  I did perform an internet search for “What kind of razor does Austin Powers use?”  Unfortunately there was no valid solution.  I now have random advertisement banners for razor blades appearing while online.  Cade has a photographic memory so I try my hardest to answer his questions accurately.  His inquiries sometime come while I am driving causing me to pull over for research.  If he wants to know who is singing the song on the radio, I can usually answer that question.  However, it doesn’t stop there.  The next question may be “Who is the drum player?”  followed by “Who is the guitar player?”  If we make it that far the next question may be “What city are they from?”  I am now tempted to answer every question “Katy Perry.”

What’s a day in the life of Cade like?  Follow me back to the bathroom where he continued his shave.  With his newly discovered fondness of Austin Powers he stroked his cleanly shaved face.  “Very shagadelic baby!”

“Cade,” I called out to him.  “What would you like for breakfast?”

“What kind of food?”

“One breakfast burrito coming up.”

The pan sizzled with the juice of the freshly diced jalapenos.  Cade likes things spicy.  As he strutted out of the bathroom he asked for my attention.  “Dad, what kind of hot sauce does Austin Powers like?”

As he made his way to the bedroom for clothing he answered his own question.  Apparently Austin Powers likes Mojo sauce and it’s red and made from ghost peppers.  He sat on the bed naked for a bit with his tablet in hand searching for scenes from “To Kill a Mockingbird.”  Cade thinks Atticus Finch is the coolest.   While slowly getting dressed he randomly slapped the screen on his tablet and laughed.  “It’s not nice to hit Atticus Finch on the face.”

“Cade,” I informed him.  “Breakfast is ready.  Stop hitting your tablet and come eat.”

“Dad, it’s not nice to hit Atticus Finch on the face.”

“No.  It’s not nice to hit your tablet either.  You might break it.”

“Dad, who would make a good Wonder Woman for Halloween?”

Cade has been asking me this same series of questions every day for the past several months.  He has given me the answers a few times.  I now know how he expects me to reply.  Why does he ask me these same questions?  I really don’t know.  However, it’s his way of engaging me in conversation.  I will gladly say the same thing all day long if it makes my lil dude happy.  He has a different set of questions he asks my wife and similarly with other people in his life.

“That’s Aladdin.” I finished his sentence.

When given questions Cade will sometime reply appropriately and other times he just replies.  This can get tricky and require a bit more research.  For instance, “Cade, do you feel well today?”

“Does anything hurt you?”

“Your head,” he may reply speaking of himself in the third person.

By sensing that something is wrong and continuing to ask questions we discover that he doesn’t feel well after all.  It’s just easy for him to reply “yes.”

“Cade did you kill Mrs. Peacock in the library with a candlestick?”

I worry that just answering yes may one day get him into trouble.

We continued our conversation as Cade enjoyed his breakfast burrito.  He took a couple bites then glanced for a moment toward the kitchen.  Although he seemed to enjoy his meal there was something missing.  He looked back at his plate then toward his Marvel comics coffee mug.  “Dad,” he asked for my attention.  “What kind of hot sauce does Iron Man like?”

“I don’t know Cade.  Let me think about that one.”

“What kind of hot sauce?”  Again he questioned.

“Iron Man…What kind of hot sauce does he like?”

Wrong again.  Cade made his way to the refrigerator.  “Let’s see.  He likes Texas Pete.”  Adding the right amount of Texas Pete hot sauce Cade finished his breakfast.  With his belly full he did what most people do after eating.  He picked up his tablet and slapped Atticus Finch on the face.

“Stop hitting your tablet,” he finished.

We are now one hour late for school.  I learned from past experience not to rush Cade in the morning.  Rushing him makes him nervous and very upset with himself.  Unfortunately, it makes him even more late.  Still giggling from slapping Atticus Finch he picked up his dishes and placed them in the sink.  As he made his way to the bathroom he noticed Uncle Brett entering the house.  Brett was returning from the gym.  He had his usual post workout meal in hand.  Brett rewards his morning workouts with a sausage biscuit, hash browns and large soda.

“Uncle Brett,” Cade shouted as he walked by.  “You can’t hit George Washington.”

“No,” Brett replied.  “You can’t hit George Washington because why?”

“He will hit you back with his cherry tree.”

“Yep.  George Washington will hit you back with his cherry tree.”  Brett grinned with his slightly crooked smile.  Cade continued to the bathroom while Uncle Brett changed back into his pajamas.  Brett always eats breakfast in his pajamas.  He took a couple bites then glanced toward the kitchen.  With his jack o’lantern pants pulled tightly up his butt crack he grabbed a bottle of Crystal hot sauce.

After one last swoop of hair gel Cade fastened his Superman back pack.  He was now ready for school.  With any luck he should make it to school just in time for lunch.  This may not seem like much of an accomplishment.  However, last year Cade typically made it to school around one o’clock.  His school dismisses at two thirty.  We walked through the school doors at 10:40 am.  As we made our  way down the corridor Cade stopped and placed his hand on the first door to the left.  Immediately a smile came over his face.  A moment later a hand appeared and touched the other side of the glass.  Cade’s face turned red as he let out a belly rolling laugh.  “Don’t touch Mr. Nelson’s face.”  He continued laughing and stumbling as we made our way to his classroom.  Cade joined his classmates as they prepared to attend lunch in the cafeteria.  As I exited the building I smiled.  Cade’s laugh is contagious.  Every day he touches Mr. Nelson’s door and every day it cracks him up.

Later in the afternoon Uncle Brett paused from singing Karaoke.  The time was three o’clock and Cade’s bus typically arrives around 3:20 pm.  Brett lifted the blinds in his room then continued his awful rendition of “Total Eclipse of the Heart.”  Brett has been given the responsibility of getting Cade off the bus.  After one last dreadful note Brett finished his song.  He then paced up and down the drive way awaiting Cade’s return from school.  I don’t know what thoughts go through Brett’s mind as he waits but he is always smiling.  I often peek through the window and notice him mumbling as he grins.

Cade placed his back back on the chair as he sat down to enjoy his after school snack.  “Dad, who’s Dora like?”

“Dad, who would make a good Wonder Woman for Halloween?”

As Cade and I chatted I could hear a vibrating noise in the distance.  I got up to search for my cell phone.  The noise appeared louder as I entered the kitchen.  The phone was resting next to the coffee maker.  I picked it up to discover there was no missed call.  The noise continued.  I made my way down the hallway to discover Brett was now singing “Enter Sandman” by Metallica.  Cade and I spent the rest of the afternoon watching Netflix and playing with action figures.

“Cade,” I asked.  “What would you like for dinner tonight?”

“What kind of food?”

“Sounds good.  When Mom gets home we will go to Tijuana Flats.”

Tijuana Flats is currently his favorite restaurant.  He has a fondness for their in house hot sauce bar.  There’s a large assortment of sauces with varying degrees of heat.  Each sauce has a clever name.  While waiting for my wife to get home Cade pondered about what hot sauce he was going to get with his meal.  He also thought about what hot sauce Batman likes.  Other thoughts included what cologne Batman wears as well as what deodorant Batman wears.

Cade smiled as he watched his mom’s car enter the driveway.  He shared his usual dialog with her then stated his dinner plans.  “All right Cade.  Let’s go,” she stated.

It was around six o’clock which is usually a less busy time for restaurants.  We try to visit restaurants during less busy hours in case Cade becomes disruptive.  We made our short drive to Tijuana Flats.  Cade stepped out of the vehicle and the restaurant staff welcomed him like a rock star.  He knows the staff by name.  He also knows many small details of each one individually.  Cade makes an impression wherever we go.  Sometime it’s good and sometime it’s bad.  We just roll with it.  Cade’s photographic memory amazes people.  I recall times we have gone to less frequently visited restaurants.  Cade uncovers information about the staff members by asking questions.  We may not see those individuals again for two or more years.  However, Cade still remembers even the smallest details about that individual.  When we see them again Cade brings up their name, their pet’s name, the type and breed of their pet, their significant other’s name, when that person’s birthday is, the day their birthday will occur this year and many other facts.

Cade called out the names of the different sauces as he poured them over his dish.  “Just in Queso…Jason’s Mom…Smack my Ass and Call me Sally…”

“Uncle Brett,” Cade asked for his attention.  “What kind of hot sauce does Superman like?”

Crumbs fell to the floor as Brett munched on his tortilla chips.  With a mouth full he replied “Red Ghost.”  The chips continued crumbling.  While dining out with the family I often scan the room.  The only other patrons that leave a mess comparable to Brett are in high chairs.  His dining etiquette is similar at home.  Sometime I envision him sitting at a park bench spreading crumbs to feed the pigeons.

We finished our dinner and headed back home.  Cade reached over to turn on the radio.  He thought for a moment as the song’s chorus kicked in, “…Cause baby you’re a firework…”

← Winds of Change
What’s That Smell? →

6 thoughts on “A Day with Cade”